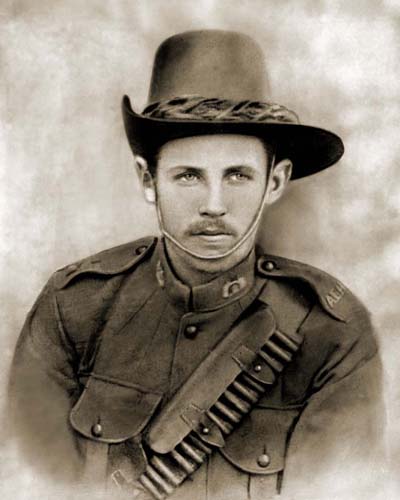 On 26 April 1902 Alfred enlisted in the 6th Battalion of the Australian Commonwealth Horse but arrived in South Africa too late to fight in the Boer War. He was discharged in Newcastle in the Natal Province on 1 July 1902 and enlisted in the South African Constabulary (SAC) 12 days later. He served with the SAC for over a year, spending part of that time in the bodyguard for the acting Governor of South Africa, Lord Milne.

Alfred reached the rank of Corporal but, after being kicked in the head by a horse and then suffering from enteric fever, was discharged as medically unfit on 7 August 1903. His discharge certificate shows that his conduct and character while serving with the SAC had been 'very good'. He eventually embarked from Durban to Australia in September 1903 and arrived in Melbourne where he stayed with his sister Jane before returning home to Beaufort.

According to Laurie Cheeseman memoirs, after Jane had seen Alfred onto the train to Beaufort, she wired their father, Alfred John, to 'be sure and meet train - perishables'. The shock of seeing his son apparently nearly killed the poor old man. To see Alfred's life after he returned from South Africa, click here.

Return to Benjamin and Jane Cheeseman