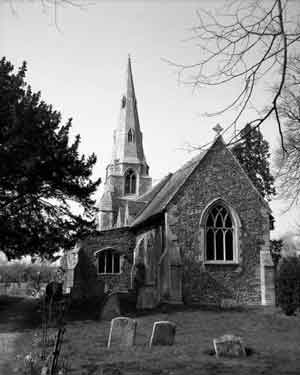 As we can see from the Bodger Family Tree, Sarah's parents were Charles Bodger (1797-1867) and Jane Wright (1803-1860). Her paternal grandparents were probably James Bodger (1769-c1797) and Sarah Chandler although this has still to be confirmed.

Charles Bodger was born at Kings Ripton in the county of Huntingdonshire in England. His wife Jane was born at Hartford which is on the outskirts of the town of Huntingdon also in Huntingdonshire. They were married in the All Saints Church of England (pictured on the left and below) in the village of Grafham on 26 May 1823. The transcript of the wedding shows that Jane was under age and had to have parental consent to marry. Both the bride and bridegroom were said to be 'of this parish', and signed the certificate with a 'mark' or cross. The witnesses to the wedding were James Wright and Rebecca Favell.

The UK censuses show that after their marriage, Charles and Jane lived at Grafham where Charles worked as an agricultural labourer. In 1841 they had with them: Joseph (15 years), James (10), Charles (8), William (5) and Walter (2). Sarah was probably visiting Charles' sister Mary Lyon in Elsworth in Cambridgeshire. In 1851 they had living with them: Joseph (24), William (15), Walter (12) and David (8). James was doing his apprenticeship with his uncle-in-law Joseph Wright in Broughton. Sarah (22) had by this time married her cousin John Wright and was living with him in Broughton (see below).

The National Burial Index indicates that Jane Bodger died at the age of 57 years and was buried at Grafham on 13 September 1860. The 1861 census shows the 61 year-old widowed Charles living by himself on the High Street of Grafham. Charles died at Grafham six years later and was buried in the local cemetery on 7 January 1867.

Charles and Jane had seven children whose lives and times are described below. Known details of their children and grandchildren can be seen on my Rootsweb site for the Wright and Bodger Families.