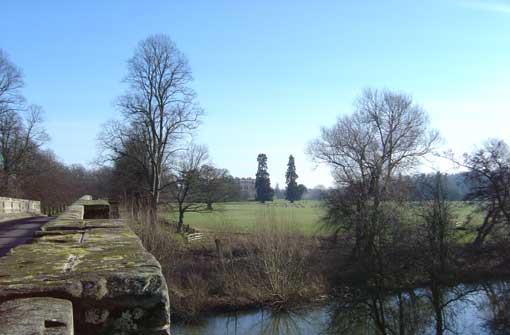 Although Jane and her mother and sister didn't stay long at Stoneleigh, it was long enough and the circumstances of the visit interesting enough, for the Abbey and its visitors to be used as settings and models for some of the places and characters in Jane's later novels Mansfield Park and Northanger Abbey.

Not long after the Austen's visit, the estate's gardens also underwent considerable change. The then owner of Stoneleigh, the Reverend Thomas Leigh, had commissioned the celebrated landscape architect, Humphrey Repton, to suggest a number of additions and improvements to the Abbey's buildings, parks and gardens. Many of the improvements proposed by Repton in his Red Book for the Abbey were not proceeded with following the death of Thomas Leigh in 1813. Others, such as the widening of the river on the southern side of the house to create a large, reflective surface of water, were delayed by floods. But some were finished including the refurbishment of the original Gate House, the extension of the deer park to one thousand acres, and the construction of a new western approach road and associated stone bridge across the Avon (shown in the photo on the left). 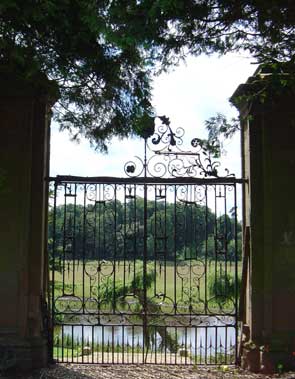 Subsequent improvements included the addition of a number of cottages and lodges which, while not the same as those proposed by Repton, contributed nonetheless to the kind of picturesque landscape he had in mind. In 1815 the construction of new stables on the northern side of the Abbey was begun. These were Tudor Gothic in style and remain today in the form of garages for the cars of the Abbey's inhabitants. The process of improvement and change slackened in the 19th century as the family was beset by financial and other concerns. One important exception was the addition, sometime in the 1850s, of a conservatory on the south side of the Abbey (shown in the photo on the left below). The building of such conservatories, heated greenhouses and 'orangeries' during this period and before reflected the obsession of the English ruling classes for tropical plants and other exotica being gathered from all over the world by such imperial plant hunters as the Tradescants. Many among the aristocracy also delighted in being able to serve their visitors in winter the tropical and other fruits that were raised in the heated conservatories.

During this time, a number of elaborate terrace and parterre gardens were also established along the western and southern walls of the Georgian section of the Abbey. These provided the setting for the visit to Stoneleigh of Queen Victoria and Prince Albert on 14-16 June 1858. As Hazel Fryer describes in an article on 'The Park and Gardens at Stoneleigh Abbey',

The Queen had come to Warwickshire to open the People's Park at Aston and her reception at Stoneleigh was a brilliant occasion...a great banquet was served and the band of the Second Life Guards was in attendance all evening to entertain the great mass of people who were assembled in the home park, just outside the terrace balustrades. On this occasion not only the old Abbey Gateway was illuminated with coloured lamps, but also all the flower beds and borders in the garden.

The following day the Royal couple toured the Italian Garden and in a small ceremony each planted a tree, Victoria an oak and Albert a Wellingtonia gigantia. The terraced gardens in front of the Georgian extension and running down to the Avon continued to be maintained into the 20th century. Unfortunately only relics of the original structures remain today and the majority of the formal garden lies in the space between the gatehouse and the front of the main house as well as in a walled garden on the eastern side of the Abbey (see the photo on the right below). Paths from the conservatory and the walled garden lead down to and along the side of the river where part of the old weir can be seen. Further along there are remnants of the dark woods that so delighted the Austens. Today these contain a few old tombstones of past childrens' pets.

The photo on the left of Stoneleigh Abbey and its Conservatory in wintertime is from across the River Avon to the south.
The one on the right is taken from the east and shows the top floors of some of the apartments
and the entrance to the walled garden.

For more information about and photos of Stoneleigh Abbey see their website which also lists available tours and when the Abbey and the surrounding gardens are open to the public. Visitors can also purchase the book Robert Bearman (ed), Stoneleigh Abbey: The House, Its Owners, Its Lands (Stoneleigh Abbey Limited, Stoneleigh; 2004) from which much of the above discussion has been derived.