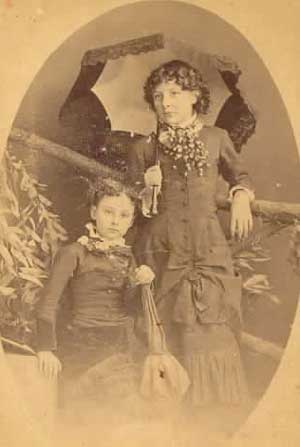 Thomas and Bridget's youngest daughter, Ellen Louise Kersley (pictured on the left with her older sister Alice) was born at Stuart Mill in Victoria on 21 January 1876. She spent her early years at St Arnaud with her family but eventually moved to Sydney where she married Hugh Smith (1872-1937), at St Mary's Cathedral on 4 November 1902. One of their granddaughters, Maureen Sharpe, tells us that, at the time of the couple's marriage 'Hugh was working as a grocer on Mansfield Street in the Sydney suburb of Rozelle and their wedding took place on the day Victory won the Melbourne Cup'. Maureen continues that, like his mother-in-law, Hugh was of Irish descent. His father was Cornelius Sheridan Smith (1843-1912) and his mother Bridget O'Neill (1844-76). Cornelius, or 'Con' as he was known as, was born at Lislea in Cavan County in Ireland and married Bridget, who came from Tipperary in Ireland, in Sydney in 1868. Con was the landlord of the Merton Estate Hotel at Rozelle from 1877 to 1912, the Beach Hotel on Smith Street Balmain, and the Cricketer's Arms Hotel on Darling Street in Balmain (later taken over by his son, Hugh jnr). His obituary, published in the Catholic Freesman's Journal on 14 November 1912, tells us Con was also an 'ardent Catholic, and his one desire was to be present to make his donations at the opening of the new St. Joseph's Church, in which he had so long worshipped'. His funeral service took place at St Josephs, officiated by the Very Reverend Father J. P. Moynagh who also read the rites at Con's graveside in the Field of Mars Cemetery in Sydney's East Ryde. The obituary adds that Con's chief mourners included 'Messrs. Charles, Patrick, and Nial Smith, the Misses Kathleen and Stella Smith, Mr. and Mrs. Hugh Smith, Mr. and Mrs. Con. Smith junr., Mr. and Mrs. E.. Mullens, Mr. and Mrs. L. Rowntree, Mrs. Halloran, Mr. and Mrs. James Halloran, Mr. and Mrs. Tom Frost, [and] many members of the Rozelle Political Labour League',

After their marriage in 1902 Ellen and Hugh Smith lived initially at Rozelle in Sydney before moving to Gladesville and then to Balmain (the 1930 electoral roll shows them at 255 Darling Street in Balmain East and Hugh working as a hotelkeeper). As the following notices show, Ellen died at Balmain on 16 July 1931 after, it seems, suffering from a long illness. She was buried at North Ryde cemetery two days later.:

The Australian electoral rolls show that after Ellen's death Hugh continued to live and work at 255 Darling Street in Balmain East until his own death there in 1937:

OBITUARY. MR. HUGH SMITH, BALMAIN. Mr. Hugh Smith, whose death occurred on the 22nd May, was well known In the Balmain district. His health had been failing for some time past and he collapsed whilst working and died shortly after. Rev. Father P. J. Morris, administered the Last Sacraments. Born at Balmain, he was the eldest son of the late Cornelius Sheridan Smith, the family was much respected identities of the Roselle district, wnere they resided for many years and gave much valuable assistance in the St. Joseph's parish. The late Mr. H. Smith was the proprietor for the past 13 years of the Cricketers' Arms Hotel, Balmain, and was popular with business people and other residents in the surrounding district. Six years ago he lost his wife (Ellen). There are six remaining children - Gladys (Mrs. J. Robson), Myrtle, Kathleen (Mrs. J. Stewart), Colin, Josie (Mrs. E. Sargent), and Jack (Catholic Freeman's Journal, 15 July 1937).

Taken at the studio of F.J. Stubbs of St Arnaud, the photo on the left is of Ellen Louise Kersley.
The one on the right shows Ellen with her older siblings Cornelius and Lucy Kersley.

Born at Roselle in Sydney Gladys married Joseph Hannington Roy Robson (1899-1966), the son of Joseph Hannington Robson (1870-1933) and Wilhelmina Minnie Lohmann (1872-1962), at Balmain in 1929. According to the 'Montgomery Family Tree' on Ancestry, Joseph snr was born at Massilon in Ohio in the United States. He married locally-born Wilhelmina at Balmain in 1896 and had eight children in addition to Joseph jnr: Linda, Francis William, Walter John, Ina mary, Henry Arthur, Elsie Eileen, Herbert Leslie and Kathleen Robson. Wilhelmina's father, Francis Lohman, was born in Germany and married Mary Kenny, a native of Wicklow in Ireland, in Sydney in 1857.

The Australian electoral rolls show Gladys and Joseph, who worked as an engineer, lived at 15 Newcastle Street in the Sydney suburb of Drummoyne from 1933 until Joseph's death there in 1966 (Gladys was still registered there in 1968). The RYERSON Index shows that Gladys Louise Robson, 'formerly of Five Dock' died at Woy Woy in NSW on 26 June 1971. Maureen Sharpe tells us Gladys and Joseph had two children:

1) Roy Vincent Robson (1933-2015) who married Joan Elsie Richards. The Australian electoral rolls have Roy, a shipwright, and Joan registered as living at 54 Church Street in the inner Sydney suburb of Balmain in 1963 and 15 Moodie Street Rozelle in 1980. The Ryerson Index shows that a Roy Vincent Robson, 82 and late of Rozelle, died on 27 August 2015. His tribute, published in the Sydney Daily Telegraph reads: 'ROBSON, Roy Vincent Passed away 27th August, 2015. Late of Rozelle. Beloved husband of Joan. Loving father and father-in-law of Mark and Jennie, Glen (dec), and Wayne. Cherished Pa of Matthew, Lyndall, Cindy and Sally. Will be sadly missed by all his family and friends. Aged 82 years Forever in Our HeartsPrayers for the repose of the soul of ROY will be celebrated at St Joseph's Catholic Church, corner Victoria and Gordon Streets, Rozelle on Tuesday, 1st September, 2015 commencing at 10:30am. On conclusion of the service, the funeral cortege will proceed to Field of Mars Cemetery, Ryde' (29 August 2015).

2) Hugh Joseph Hannington Robson (1930-2005) who married Colleen Josephine Peacock (1928-2015) at All Hallows at Fivedock in Sydney in 1952. The Ryerson Index shows that a Colleen Josephine Robson, aged 86, died in Sydney on 5 March 2015. Her tribute, published in the Daily Telegraph reads: 'ROBSON, Colleen Josephine 6.11.1928 - 5.3.2015 Much loved wife of Hugh (dec). Adored mother of Denis, Stephen, Terry and Dianne. Treasured mother-in-law, grandmother and great grandmother. Too dearly lovedto be forgotten. Mass of Christian Burial for COLLEEN will be offered at Holy Spirit Catholic Church, Todd Row, St Clair onFriday, 13th March, 2015 commencing at 10:30am. Following the Mass the cortege will proceed to Pinegrove Cemetery for burial' (10 March 2015).

Myrtle was also born at Rozelle. The Australian electoral rolls shows Myrtle living at with her parents and siblings at 255 Darling Street Balmain East at the time of the 1930, 1933 and 1936/7 elections. She married Charles Joseph Yates (1898-1969) at Rozelle in 1941. The electoral rolls show Myrtle and Charles, an ironworker, living at 12 Louisa Road Balmain from the 1940s until the 1960s. Charles died at Balmain in 1969. The Ryerson Index shows Myrtle Mary Yates, late of Balmain and Granville, died at Leichhardt on 30 August 1983. She and Charles had one daughter, Maureen Yates (now Sharpe).

The photo on the left is of Ellen and Hugh Smith with their two youngest children, Gladys and Myrtle,
and Hugh's aunt Elizabeth Halloran. The one on the right is of their third daughter, Kathleen Maud Smith.

Born at Rozelle, Kathleen (pictured above) grew up in Balmain where she married Joseph Albert Stewart (1906-75) in 1930. The NSW bdms show Joseph was born at Balmain North in 1906, the son of William H. J. and Mary A. M. Stewart. The 'Knowles family Tree' on Ancestry tells us that Joseph's parents were William Henry James ('Brickie') Stewart (1866-1960) and Mary Ann Morgan Jeffries (1870-1928) who were married at Balmain in 1889 and had eleven children in addition to Joseph. William was born and died in Balmain. His great grandfather, Robert Stewart (1778-1834), was a Yorkshireman who, as a member of the 46th Regiment of Foot, came with his family to Sydney in 1814 on the sailing ship WYNDAM. Ten years on, Robert 'received a Military Discharge and remained in the Colony after his Regiment left for another posting. Robert then went back to his trade as a Tailor, and had his business in Sussex Street in Sydney'. William's grandfather, John Stewart (1802-77), was born in County Limerick in Ireland while Robert was on a posting there. He married Lydia Bates (1806-67), a daughter of a convict, in Sydney in 1825. They had ten children in addition to William.

The electoral rolls show that after their marriage Cornelius and Eileen lived at Hurstville in Sydney until Cornelius' death there in 1983 (he is buried in the Woronara Memorial Park Cemetery in Sydney's Sutherland Shire). Eileen died at Allawah in Syney in 1991. They had two children we are aware of: Neil and Bruce Sheridan Smith.

Born at Gladesville in Sydney, Josephine married Ernest John Sargent (1907-79), the son of Robert Alfred Sargent (1867-1952) and Cassie Elsie Wright (1882-1941), at Rozelle in 1936. They lived for a time after their marriage at West Ryde where Ernest was working as bus driver, and then Ermingtob. Ernest died in the Concord Repatriation and General Hospital in 1979. Josephine died at Concord twenty years later. Her tribute, published in the Sydney Morning Herald on 6 October 1999, reads: 'SARGENT, Josephine Mary, October 2 1999, peacefully at Concord Hospital, late of Rhodes formerly of West Ryde. Beloved wife of Ernest (deceased). Loving sister of Gladys, Myrtle, Kathleen, Con, Jack (all deceased). Loving mother and mother-in-law of Wendy and John, Warwick and Nora, Neville and Leigh. Devoted Nanna and great-grandmother to their families. Aged 88 years'. As described, she and Ernest had three children we are aware of: 1) Gwendoline Patricia Sargent who married John William Hutchinson and had five children; 2) Warwick John Sargent; and 3) Neville Sargent.

Born at Balmain in 1916, John married Grace Sylvia Hall (1910-94) at Marrickville in 1942. The Australian electoral roll shows John Roy, an ironworker, and Grace Sylvia Smith at 21 Shaw Street in Petersham in 1943 and on Shellharbour Road in Lake Illawarra near Kiama in 1949. They had one child we are aware of: Jayne Sheridan Smith.