Five years after their marriage at Haslingfield in 1848, William and Louisa Free and their two children Rebecca Louise (3) and John (1) emigrated to Australia on the Lady Kennaway. This sailed from Southampton on 9 May 1853 and arrived at Port Phillip Bay on 15 August the same year. A week before their arrival, Louisa had given birth to an (unnamed) male child who died the next day and was buried at sea (the marine register shows that the child was born prematurely at latitude 40 degrees south and longitude 120 degrees east and was buried at latitude 40 degrees south and longitude 123 degrees east).

While William and Louisa would no doubt have been pleased to have arrived safely at their long-looked-for destination, their initial experience of their new homeland may also have given them some pause for thought. For they were landed not at a wharf but on a beach - Liardet's Beach or Sandridge as the respectable classes preferred to call it - at which there were present some ramshackle buildings, but no quay, no warehouses, no merchants, and no shade in which the women and children could rest while the men looked for transport. The shore up to the high-water mark was lined with broken drift spars and oars, discarded ship-blocks, mattresses and pillows, empty bottles, ballast kegs, and sundry other items of flotsam. The township of Melbourne was out of sight, some eight miles distant by river and three across land. The Lady Kennaway and the fourteen other ships that had arrived on the same day with their passengers and goods from such places as Bristol, Glasgow, Rio de Janeiro and Wanganui in New Zealand, lay at anchor up to a mile offshore. With them were dozens of other two- and four-masted vessels whose crews had abandoned ship and headed inland to the goldfields. 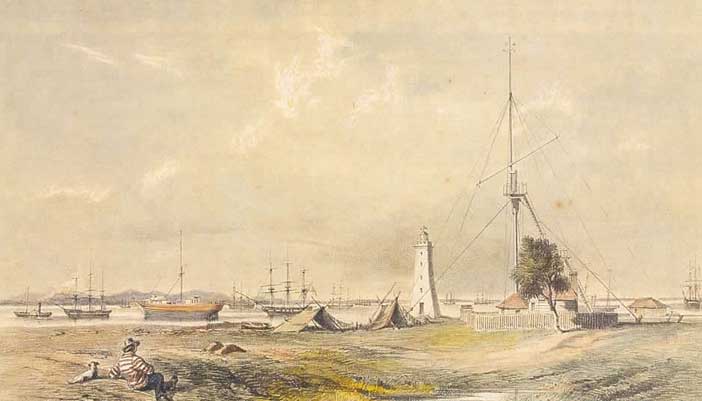 William's Town lighthouse and shipping in Hobson's Bay in 1853 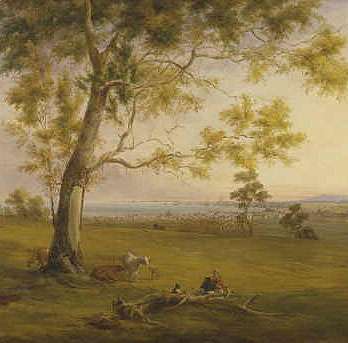 The transport from ship to shore and thence to the boarding houses and hiring depots of Melbourne was conducted by boatmen, carters and draymen who assessed in a glance their prospective passengers and charged accordingly - 2s. 6d. a trip for ordinary immigrants and as much as one pound for single gentlemen or those who protested at the price. These were no doubt outraged at being 'fleeced' by members of the labouring classes or, worse still, by former thieves who had been earlier 'transported for their country's good' (Howitt, 1972: 50). But given the demand for transport, there was little they could do other than walk or carry their possessions along the sandy track edged with scrubby tea-trees and banksias that ran from Sandridge into town. After skirting a number of swamps and gullies, the traveller would have come upon Emerald Hill, an exposed, grassy area near where South Melbourne is today and at which were encamped, in tents that looked too 'thin and white for outdoor life', hundreds of immigrants and their families (Howitt, 1972: 12). These were destined for the diggings around Ballarat and Bendigo, and preferred to pay the government five shillings a week to stay on this and other wastelands than the exorbitant rents being charged by Melbourne's denizens. 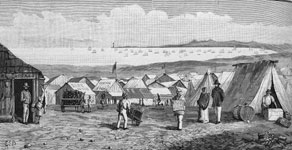 In spite of the numbers present, the atmosphere in the camps was generally happy, almost buoyant. People sat around their cooking fires talking and laughing. Many of the men had removed their jackets, and the younger children ran about the place barefooted.

Although Melbourne had grown beyond the collection of 'cottages and mean huts' observed by Alfred Joyce a decade earlier, it continued to exhibit a 'straggling and unfinished appearance' (Howitt, 1972: 13). The central area of the town contained a number of churches and other large buildings made of stone and iron. But these were scattered unevenly across the city space, and between them were located a rough assortment of yards, stores and lodgings constructed mainly of canvas and wood. Along the river were the town wharves (pictured below) which were marked by lines of lighters, steamers and other small sailing vessels, three and four deep, discharging their various cargoes into the substantial warehouses that lined the bank. The streets were neither lit nor drained and were clogged with horse-driven drays, coaches, vans and carts in such profusion that the scene would have reminded many newcomers of London or Dublin. 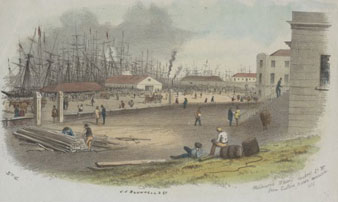 Except in the town centre, where the roads were laid out and flagged, these vehicles were driven wherever there was space, churning up the soil and, in summer, contributing to the clouds of dust that hung over the town. On the other side of the city area, flowing from the higher ground to the north down into the vale of the Yarra, were the suburbs of Collingwood and Richmond. According to William Howitt, who arrived in the colony the same year as William, 'a balder and more unattractive scene' could not be imagined. Where before there had been grassland and evergreen trees, the area was now 'a wilderness of wooden huts of Lillipution dimensions; and everywhere around and amongst them timber and rubbish, delightfully interspersed with pigs, geese, hens, goats and dogs innumerable ... there is not the trace even of the idea of a garden' (Howitt, 1855: 15-6).

Like all newcomers, William and Louisa were likely to have been struck by the feverish spirit of the town and the rawness of the life and behaviour of its inhabitants. Alongside the hopeful immigrants and the gold-seeking adventurers thronging the streets were the diggers; wild-looking fellows with broad hats and flowing beards that 'might have frightened a Russian bear' (John Sherer, cited in Kiddle, 1963: 191). As Margaret Kiddle later described, the digger was easily distinguishable from the newest arrivals. His face was 'darkened not only with sunburn, but dirt; the loose blue or scarlet serge shirt was belted over trousers stained with yellow mud; pistols and knives were stuck into the belt; picks and shovels were carried as well as a swag, and the whole rig-out was generally accompanied by a ferocious dog' (Kiddle, 1963: 189).

The diggers language and manners were as shocking to the newcomers as their lurid shirts. Many labourers and workers among them who had struck it rich took particular delight in flaunting their success. They wore toppers instead of their usual cabbage-tree hats, dressed in the best broadcloth, and covered themselves with flashy gold rings and other expensive adornments. 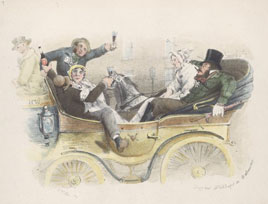 They used bottles of expensive wines for their games of skittles, lit up their cigars with five-pound notes, and drunkenly paraded about town in carriages driven by liveried coachmen. In these they were often accompanied by women or girls who were 'decked out in the richest and brightest of silks and satins, below which not unfrequently peeped bare red feet' (J. H. Kerr, cited in Serle, 1977: 29). When they were not carousing in the local taverns and inns, some successful diggers took their place in the dress circles of the town's theatres where they and their consorts smoked Barret's twist in their short-stemmed pipes and, seated alongside the theatre's normal patrons, watched the latest entertainments from London and New York.

The respectable denizens of Melbourne may have looked askance at the raucous diggers and their female companions, but they shared with them a profound interest in the latest news from the diggings. The intensity of the fever caused by gold waxed and waned but, much like malaria and other tropical diseases, never fully left its host, lying dormant in the blood, until activated by a newspaper report, a conversation, or one of the rumours that seemed always, like Melbourne's dust, to be hanging in the air. In the early days, an outbreak of gold fever would empty the squatters' runs of their workers and the towns of their male inhabitants - for the disease seemed mainly to affect men. In later years it would see, in addition to the streams of overseas hopefuls flowing from the towns into the bush, hundreds, sometimes thousands of miners suddenly rushing from one digging to the next. In the process, what had earlier been a secluded bush valley became a 'street about two miles long, lined on both sides with the tents of storekeepers, butchers, doctors, barbers, eating houses, refreshment sellers, auctioneers and a host of nondescript tradesmen...with thousands of diggers in the background on both sides' (Alfred Joyce in James, 1969: 152). And, from daylight to dusk, the quiet calm of this ancient country was rendered by the creaking of windlasses, the thud and scrape of picks and shovels, and the oaths and utterances of men of all classes and nationalities who laboured side-by-side in their holes in the ground. 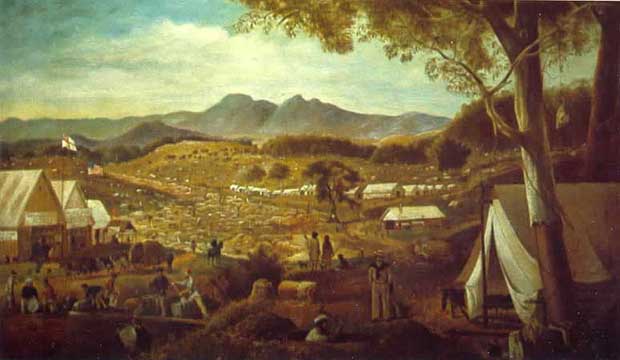 Gold diggings at Ararat in Victoria in 1853

At Melbourne's employment depot, William put his mark to a contract to labour for a Mr Patterson of Collingwood for six months from 26 August 1853. For this he would be paid at the rate of 80 pounds per annum and he and his family would be provided with rations. William's employer may have been the celebrated John Hunter Patterson who owned a residence in Brunswick Street and was renowned in the early days for driving about town in a 'spanking carriage with a fine four-in-hand team' (Bride, 1969: 151). As a boy, Patterson had sailed with his parents from Leith in Scotland to Hobart Town in 1822. In the late 1830s, he entered into 'numerous large speculations in and near Melbourne' before going bankrupt during the 'hungry forties'. A few years later he acquired the lease to the Campaspie Plains run where he made a fortune selling mutton to the miners at the Heathcote and Maryborough diggings. 'A public-spirited man', Patterson was a member of the 'squatters' clique' in the Victorian Legislative Council from 1856 until his death three years later.

William and Louisa were then staying with William's cousin, William George Free at Upper Hawthorn in Melbourne. William George was the son of Samuel Free's brother, John Free (1796-1890) and Elizabeth Miller (1797-1869). According to Robert O'Loughlin, William married Eliza Morley at Brighton in Sussex in 1852 probably en route to Australia. It is possible that Eliza came from Barrington where a number of Morleys lived. After arriving at Port Phillip in 1852, the couple lived initially at Upper Hawthorn where their only child, Henry George Free was born on 13 September 1854. According to Leigh Mills in 1856 William and his brother John Free were living at Camberwell where they worked as carters. William George died in Hawthorn in 1901 of senile decay and heart failure. He was 76 years old. His death certificate indicates he had by than become a gentleman and had been 48 years in the colony.

While staying with William George in Hawthorn Louisa died on 2 September 1853 from illness accentuated by the loss of her child at sea. She had been in the colony a mere 22 days. Four months later, in the midst of a heatwave that had lasted for weeks, and during one of Melbourne's regular dust storms, young John also died of exhaustion and malnourishment caused by constant vomiting and diarrhoea. He was buried in the bushland cemetery that lay outside the fringes of Melbourne's settlements at Boroodara. It is likely that during the small service for his son, William determined he would leave this cursed place before it also claimed his Rebecca. True to his word, a few days after completing his contract on 24 February 1854, William, his first born and all their possessions were loaded onto one of the steamers that regularly sailed from Melbourne to Geelong. There he would work as a shepherd - his true trade - at a place named Mount Hesse.

Click here to read of William and Rebecca's life and times at Mount Hesse.

Return to Free Family in England