Return to Kersley Family in England

Part I: Life and Times

Thomas' younger brother, Robert Kersley (1834-1915) also came to Australia although it seems he never met up with Thomas. Robert had been baptised at Mapledurwell in the county of Hampshire in England on 13 August 1834. Five years after the death of his mother, Letitia Kersley nee Prince, he sailed with his widowed father and six of his siblings from Liverpool to the United States on the ship ONTARIO. They arrived at New York on 22 June 1841 and were said to be bound for the County of Delaware. Although we haven't been able to confirm it, we think it likely Robert returned to England with his family although it is possible he may have stayed in the US. His death certificate indicates he emigrated to Australia in around 1855 although how he got here and where he landed remain uncertain.

It is possible that, like some of his cousins, he joined the Royal Navy. The 'NSW Goal Description and Entrance Books, 1818-1930' located on Ancestry.com, includes among its 1852 admissions a Robert Kersley who was born in 1833 and arrived in Australia in 1852 on the English warship HMS FANTOME. The record provides no indication of why this Robert was gaoled at Darlinghurst although the Maitland Mercury and Hunter River General Advertiser reported, on 15 May 1852, that five deserters from HMAS FANTOME, who had been at large since February 1852, had been apprehended at Brown's River. 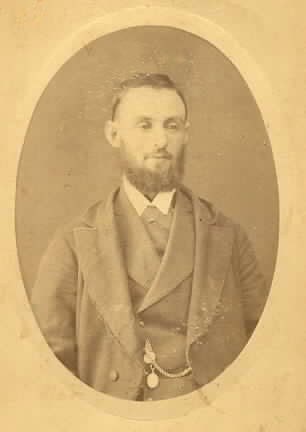 We do know that our Robert eventually made his way to Mudgee in central NSW for this is where he married Catherine Murray on 16 May 1867. The couple's wedding certificate shows that Robert, who was then working as a labourer, was a bachelor and Catherine a spinster. His normal residence was Rylestone and hers was Mudgee. Unlike Robert, Catherine could not write, signing the certificate with a mark. The witnesses to the wedding were an Owen and Isabella Oxley. Unfortunately no details were provided of the couple's ages, places of birth or parents. The photo on the right, from a collection of Kersley photos held by the descendants of Robert's brother, Thomas Kersley, could be of Robert although that has still to be confirmed.

According to Diane McGowan's 'Welsh & Murray Family Tree' on Ancestry, Catherine was born in around 1840 at Tomgraney in County Clare in Ireland. She also thinks that Catherine's parents were William Murray and Catherine Quinn and that she travelled to Australia on the DAPHNE, arriving at Sydney on 16 January 1859 (note that the NSW index of passengers shows this Catherine's birthyear as 1843). The entry for Catherine's death certificate in the NSW Registry of bdms states her father was John Murray and her mother's maiden name was Quinn thereby partially confirming Diane's understanding. The inscription on Catherine's gravestone, described below, provides further confirmation that she was born in County Clare in around 1840. An entry in the 'NSW Immigration Deposit Journals, 1853-1900', showing that a Mary Walton made a deposit on 26 April 1868 for two domestic servants - Mary Murray (20) and Catherine Murray (19) - to come to the colony, provides further evidence that Catherine's birthplace in Galway may have been Tomgraney (or Tuamgraney).

Catherine and Robert Kersley, described by Greville's 1872 Post Office Directory as a farmer, lived at Rylstone after their marriage and had seven children we know of there: Letitia Catherine (born in 1868), Mary Maude (1869), Edgar Prince (1871), Annie May (1873), Emily Jane (1875), Albert William (1878) and Clara I. Kersley (1881-82). Thought to be named after the village of the same name located near Skipton in North Yorkshire, Rylstone sits on the Cudgegong river and, as a correspondent to South Australia's Petersburg Times informed his readers in 1894, is 'almost encircled by still higher hills'. These include Rumker's Peak, Mounts Dorale, Frune, Tongbong ('a veritable mountain of coal') and Coomber Mellon (near where Robert ran a 105-acre farm). The local scenery, the correspondent continued, 'reminds one of Cumberland and Westmoreland' in England. The township of Rylstone itself

...is blessed indeed; for not only are her surroundings unique and beautiful ... the town is clean, bright and pretty. Its roads and streets are white and hard, its houses of the whitest free-stone which forms a marked contrast to the lovely foliage of the nicely kept gardens with which almost every tenement is adorned. Flowers and fruit are in abundance and the residents take a commendable pride in their culture - which they promate by means of an excellent horticultural society. 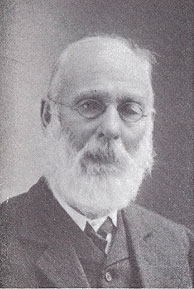 Although Robert (pictured on the left) first worked as a labourer and farmer, he later turned to primary school teaching. According to Ancestry's 'NSW Teachers' Rolls, 1869-1908', on 23 March 1878, the 44 year-old Robert was appointed as 'a teacher on trial' at the 'Coomber Street Primary school at Rylstone'. The school had been established in around 1857 and was upgraded in 1868 and again in the year Robert joined the staff (the school then had some 90 students). Although he failed to obtain classification at his examination on 19 December 1881, Robert was subsequently put in charge of Class IIIB at the nearby school at Coomber (later named Kandos). On 14 July 1890, he was made principal teacher of Carivell and Coomber and, on 18 June 1896, was instructed to conduct Coomber on a full time basis (it had previously been operated part-time). The rolls indicate that he continued teaching for a further four years before retiring at the age of 65 on 30 April 1901.

Although he may have regretted having to retire, it is likely Robert would have drawn comfort from the fact that two of his and Catherine's daughters, Mary Maude and Annie May Kersley, followed their father's example and also trained and worked as teachers (Maude at Kienbri and Bundemar between 1888 and 1891, and Annie at Tong Bong, Glen Lee and Condobolin between 1891 and 1897). By this stage Robert was being dogged by poor health. A report in the Mudgee Guardian in 1909 indicated he had lost an eye 'many years ago' and that 'the old gentleman's sight is seriously impaired now the remaining optic is beginning to weaken'. Three years later the same source reported to its readers that a 'Mr R J Fletcher [had] purchased Mr Kersley's neat town property for Ł450, and he got a bargain, for it is one of the best situations in town and surrounded by a very fine orchard ... Mr Frank Lloyd purchased Mr Kersley's Coomber land of 105 acres at a cost of Ł2/18/- per acre'.

In their remaining years, Robert and Catherine seem to have spent much of their time visiting and staying with their grown-up children who, by 1911, had all married and moved away from Rylstone. It was during one of these visits that Robert Kersley died, in Yass on 23 March 1915. His death certificate, informed by his daughter Annie May Rutherford, states he died of senile decay and cerebral thrombosis and was a retired teacher. The following obituary was published in the Yass Courier on 29 March 1915:

A sad death occurred on Tuesday when Mr R. Kersley, late of Rylstone, passed away at the residence of his daughter (Mrs A. J. Rutherford) at the age of 81 years. Mr Kersley came over here to spend Christmas with his daughter but had the misfortune to be stricken down with paralysis which necessitated him taking to his bed, and though everything possible was done for the poor old gentleman, he never rallied and on Sunday last had another stroke and never regained consciousness, passing away at 12.45 on Tuesday morning. Mr Kersley was well known in the Rylstone district where he was a resident for over 60 years.

Robert was buried in the Church of England section of the Yass cemetery. His headstone reads: 'Sacred to the memory of Robert Kersley beloved husband of Catherine Kersley who was born in Mapledurwell, Hampshire, England and died at Yass March 23rd 1915 in his 81st year. Lay up for yourselves treasures in heaven, for where your treasure is there will be your heart'. Family folklore has it that not long before he died, Robert met his brother Thomas' son-in-law, William Joseph Laurence, either at Narrandera or Albury where Robert's own son, Edgar Prince Kersley, was stationed as a policemen. Apparently Robert told William he never saw Thomas in Australia.

Eight years later Catherine Kersley nee Murray died while staying with her daughter, Emily Jane and her husband Andrew Bolger, at their property 'Fontenoy' at Wallendbeen in outback NSW. She was buried in the nearby Wombat Cemetery. Her gravestone, a photo of which is contained on the Australian Cemeteries Index, contains the inscription: 'Our Dear Mother Catherine Kersley Born County Clare Ireland who departed this life Nov 11th 1923 Aged 84 years RIP'. Buried next to her is her son-in-law Andrew Bolger (1869-1953) and daughter Mary Maude Connell nee Kersley (1871-1927). The following obituary for Catherine was published by the Albury Banner and Wodonga Express on 16 November 1923:

The death of Mrs Kersley occurred at Fontenoy, near Cootamundra, on Sunday. The deceased lady resided with her daughter, Mrs Bolger, since the death of her husband some four years ago. For the last six months she was practically an invalid, so that her end was not unexpected. She had long passed the allotted span, and was in her time a woman of simple and charming disposition. Deceased was the mother of Sergeant E. P. Kersley of Albury.

What of Robert and Catherine's family? As already noted, we know that they had at least seven children, all born at Rylestone. The youngest of these, Clara Kersley, died there as an infant. The others all survived their childhood, married and moved away from their place of birth. Click here to read about their lives, times and families.

Return to Kersley Family in England