My father, Laurence Alfred ('Laurie') Cheeseman, was born at Skipton in central Victoria on 2 March 1915, the eldest son of Alfred William Cheeseman (1881-1949) and Alice Maud Laurence (1890-1967) who were married at Narrandera in NSW in 1910. He had six siblings: two older sisters - Alice Winifred ('Winnie') and Christina Mary ('Teen') Cheeseman - and four younger brothers: Leslie William ('Les'), Lance Edward, Reginald and Alfred ('Freddy') Cheeseman. Laurie married a Mallee girl, Elsie May Hickmott (1917-2015), at Ouyen in Victoria in 1943. He was then serving in the Second AIF and had to return to active service in New Guinea shortly after the wedding. After the war he worked as a fireman and later a train driver for the Victorian Railways. He and Elsie lived for a time at Kyneton in central Victoria and then Wahgunya on the Murray River opposite Corowa in NSW. They moved to Melbourne in 1953 where they and their four children lived first at Sunshine in Melbourne's inner west and then in the city of Dandenong in Melbourne's outer eastern reaches. Laurie and Elsie lived the remainder of their lives at Dandenong, he dying there in 1982 and she in 2015. They are buried together in the Springvale Botanical Cemetery.

Following the example of his eldest sister, Winnie, and encouraged by my mother, Laurie spent the last few years of his life writing his memoirs. He got as far as 1969 before he died in his sleep at Dandenong in 1982. His hand-written notes were edited and compiled by my mother and printed as a 40-page mimeograph a year or so later. The first page (reproduced below) provides information about Laurie's grandfather, Alfred John Cheeseman, and father, Alfred William Cheeseman, before he was married. Like many reminiscences of this type, Laurie's brief account of his grandfather's early life in Victoria contains a number of claims that are either inaccurate or unverifiable. First, we could find no evidence in either the available baptism and death records or the list of passengers on the immigrant ship on which his family travelled to Victoria that Alfred John had a twin brother (his siblings comprised a younger brother, an older half-brother and a sister).

The ship's records further show that Alfred John's parents had been contracted to work for a James Egan of the Major's Line station near Heathcote in Victoria (for a period of six months for which they were to be paid fifty pounds plus rations) not the Bet-Bet Station as Laurie believed. Finally we have have been unable to confirm that Alfred John's father, Benjamin Cheeseman, was committed to the Ararat Mental Asylum. Indeed we have been unable to find any record of his death or burial in Australia suggesting that, like many others during this time, he may have perished in the bush or had even left the country.

Alfred William's attestation papers in the Australian National Archives show that he served in No 4 (Sale) Troop of A Squadron of the 8th Battalion of the Australian Commonwealth Horse. He enlisted at Ballarat on 26 April 1902, was then 21 years old, had been born at Snake Valley and was working as a 'bushman'. The Australian Commonwealth Horse (ACH) was a mounted infantry unit and the first expeditionary military force to be established by the newly formed Commonwealth of Australia. More than 4,400 men enlisted in the ACH, with individual troops and squadrons raised in different states and then combined to form eight battalions. The 1st Battalion of the ACH arrived at Durban in March 1902. It and the 2nd Battalion conducted patrols against the Boers during the last great battles that ultimately ended the war. The 3rd and 4th Battalions arrived too late to see any action. When peace was declared on 31 May 1902, the 5th, 6th, 7th and 8th Battalions were still at sea en route for South Africa.

As Laurie's memoirs note, Alfred was discharged from the ACH in Newcastle in the Natal Province on 1 July 1902 and enlisted in the South African Constabulary (SAC) 12 days later. He served in the SAC for just over a year and reached the rank of Corporal but, after being kicked in the head by a horse and then suffering from a bout of enteric fever, was discharged as medically unfit on 7 August 1903. His discharge certificate shows that his conduct and character while serving with the SAC had been 'very good'. He embarked from Durban for Melbourne on the steam ship COOEYAWUA on 2 September 1903.

The remainder of the memoir is on much surer ground as it deals with Laurie's own life and times, from his childhood in central Victoria, through his years in the Mallee and southern NSW as a young adult, to Melbourne and beyond during the Second World War, and then back to Victoria and a settled family life. His written account of much of this time is supported and enhanced by photographs that Laurie and others took of various people, places and events. Although this written and photographic memoir deals with one person's experiences and life-span, it has a much broader relevance and resonance, providing a typically self-deprecating, sometimes humorous and always interesting insight into the lives, times and spirit of our parents' generation. 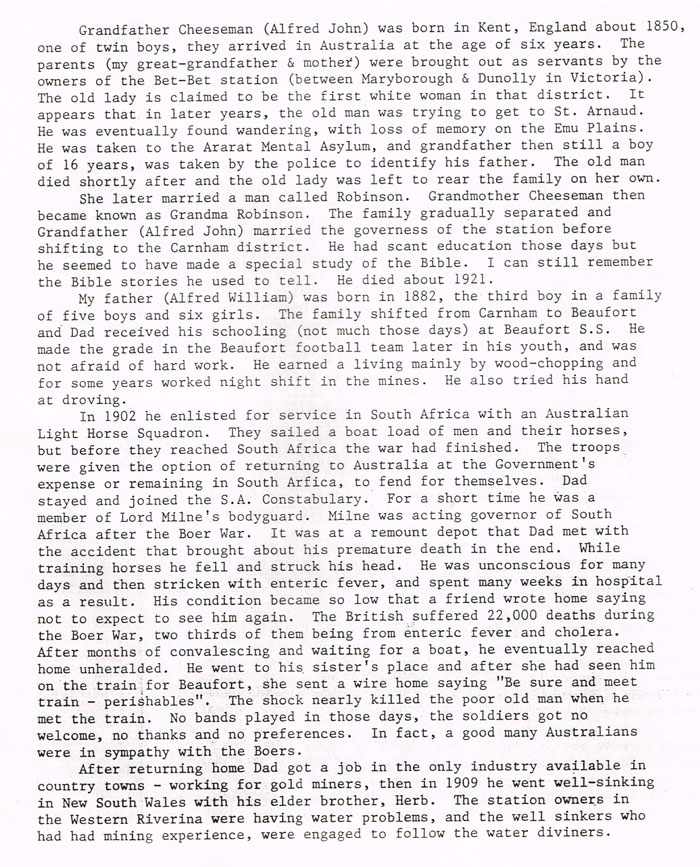