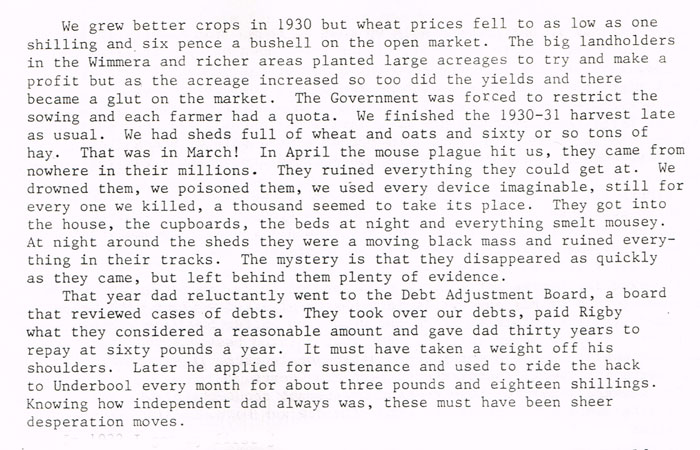 Laurie didn't only work for his father. In 1932 he got a job with Octavious Llewellyn ('Jacky') Williams, 'an old bachelor who talked to himself by the hour and had me on the move from dawn til dusk, six days a week, then on Sundays he would ask me if I minded helping him cut chaff'. For his efforts, Laurie was being paid the ten shillings a week the state government gave farmers to employ people in the region plus another ten shillings. 'I stayed just a month and then went driving for a couple of weeks with Slattery [Kevin Slattery, the only son of their nearest neighbour, Tom Slattery, and his wife, Mary (or 'the mater' as Tom called her)]. I bought my first suit of clothes and had a quid or so left. I was made'. He and Les played in the local cricket competition. Laurie also played football for Torrita in the Murrayville League - 'I loved football and usually played on the wing or centre. I used to ride the pony to Torrita and then travel [to the game] in the back of a truck and often did not get back home until nine o'clock at night'.

The photo on the left shows Les, Alfred and Laurie about to leave for a cricket match at Kattyoong. Behind them is the 1927 Chevrolet in which the family
had driven from Skipton to Walpeup. The photo on the right shows Laurie, Reg, Winnie and Lance at Walpeup in 1930.

The following year Laurie got a job picking fruit on Reuben Mansell's block at Coomealla , near Dareton on the Murray River. Alfred drove Laurie and Bill Warren, 'a pommy who used to be always hanging around the place', up to the river. At the end of the season they rode back to Walpeup on bicycles. Laurie had bought his from a Broken Hill man for three pounds ten shillings - 'the first one I had ever owned. We packed all our belongings and set off and I had the skin off my backside before we had gone five miles. We made Hattah that night and slept in the hoboes' shelter there and next day we battled over the sandy ridges through Trinita and Kiamal to Ouyen. I could coast down the hills all right but had to get off and walk up most of them . . . We only made Galah by next night and camped out under the stars. I was very glad to get home next morning to a late breakfast. I had been away six weeks and got home with about four pounds plus a pair of shoes (the first I had owned), a couple of shirts and a tweed cap, which I was very proud of'. 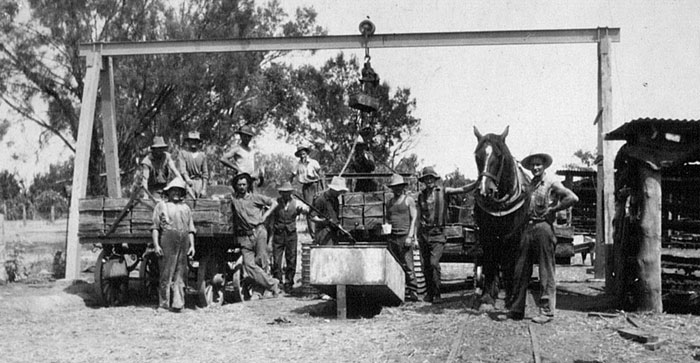 On the back of this photo is written: 'Fruit picking time at Ruben Mansell's property at Coomealla. Feb 1933'.

The remainder of 1933 saw Laurie cutting and carting hay for another local farmer, George Latta (who was born at Bungaree in Victoria in 1868, the son of John Latta and Elizabeth Ann Downing nee Dean. George married Emily Jane Nichols at Ballarat in 1893 and had eleven children, one of whom - Arthur Latta - is pictured in the photo below). Laurie enjoyed his time there and the camrarderie of his fellow workers. 'We carted in about four hundred tons of hay and cut it into chaff. I liked working with hay and prided myself at stacking it on the wagon, no matter how many stumps we ran over, my load never shifted. But what I liked best was the food. Three good meals a day and morning and afternoon teas, it was good. I had a cheque for twenty pounds when I left old George'.