The Forbears of Jane Elizabeth Wright

Jane Elizabeth Wright's father was John Saunders Wright who was baptised in the parish church (pictured on the left) at Broughton in Huntingdonshire in March 1826. As you can see from the Wright Family Tree, his paternal grandparents were John Wright and Mary Stokes. John and Mary were married at Hartford in Huntingdonshire on 1 November 1791. The Hartford parish registers show that at the time of their wedding, John and Mary were a bachelor and spinster respectively and each signed the certificate with a 'cross'. The wedding was witnessed by Edward Stokes and Edward Afford. 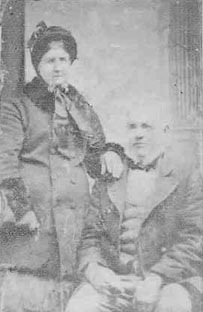 John Wright died and was buried at Broughton on 2 October 1825, a few months before his youngest son, John Saunders Wright, was born. It seems that Elizabeth had a further child after John's death. The parish transcripts for Broughton show that a Sarah Ann Wright, the daughter of Elizabeth Wright, 'a single woman and widow', was baptised there on 13 Oct 1833.

Family folklore, recorded in 1970 by one of John Saunder's granddaughters, Theresa Kerr (nee Krick), has it that John's family were victims of an outbreak of cholera which orphaned young John and left him in the care of friends. At the age of eight he went to work on a local farm 'receiving 6d a week to stone the crows from the corn crops'. We think it unlikely John's father died in the cholera epidemic as that occurred in 1832. As we have seen, John's mother, Elizabeth Wright, continued to live in Broughton after her husband's death although we don't know for how long. Nor do we know if she continued to look after the younger members of the family or was forced to live as a pauper in the local poor house. The 1841 census does show a 15 year-old John Wright working as an agricultural labourer on the farm of Mary Stephenson at nearby Wood Walton.

John Saunders Wright married his cousin Sarah Bodger at Grafham in Huntingdonshire in England on 28 February 1848. He was a bachelor aged 22 years and she a twenty year-old spinster. Both were said on the wedding certificate to be labourers where he lived in the adjoining village of Warboys and she in Grafham itself. The marriage was witnessed by Sarah's brother, James Bodger, and Elizabeth Eynsby where all signed the certificate with a 'mark'. Jane was born at Grafham in Huntingdonshire in 1828. Her father was Charles Bodger (who was born in Kings Ripton in Huntingdonshire in 1797) and her mother was Jane Wright who was born in Hartford in 1803. More on Sarah's family is given at The Bodger Family.

After their marriage, John Saunders and Sarah Wright lived at Broughton where their eldest daughter, Jane Elizabeth Wright, was baptised on 7 September 1849. The family was still at Broughton at the time of the 1851 census and had living with them a 56 year old widow, Mary Hunter, who was a nurse and former school mistress. The following year saw them leave Broughton and emigrate to Australia where John was contracted to work for Philip Russell at his sheep station at Carngham in the colony of Victoria. Click here to read about their life and times in Australia. A photo of Sarah and John, taken at Carngham in the 1880s, is shown on the right.

John Saunders Wright had five brothers we know of: William, Joseph, David, Thomas and James Wright. He also had a half sister, Sarah Ann wright, who was born in Broughton in 1833 and probably died there in 1838. We have discovered very little about John's oldest brother, William Wright, beyond his marriage to Martha Sisman at Broughton in 1837. It is possible that like John, he emigrated although that has still to be determined. As described below, John's other brothers married and lived their lives in England, three at Broughton and one, Joseph, at Evendon in Northamptonshire. Joseph worked as a cobbler and shoemaker. The others were, like John in his early days, agricultural labourers. Between them the four boys had some 30 children and at least 54 grandchildren. Many of these continued to live in Huntingdonshire although a number moved to London or into other counties including Norfolk and Yorkshire. While many continued to work on the land others took up trades, or as the industrialisation of Britain proceeded, worked for a railway company or, as domestic servants for the expanding middle class. We suspect that a number of their descendants followed our John's example and emigrated to the New World although, to date, we have identified only one person, John Henry Wright, a grandson of David Wright, who, with his wife Emily and two small children, left England in 1920 bound for the wheat-belt town of Wagin in Western Australia. The details of John's siblings and their lives and families are listed in my Rootsweb site for the Wright and Bodger families.

Born in Broughton in 1819, Joseph worked as a shoemaker. He married Elizabeth Pack (1817-82) at Great Stukely in Huntingdonshire in 1840. The LDS Index shows that Elizabeth was born at Great Stukeley in 1817, the daughter of James and Susanna Pack nee Baxter who were married at Yelling in Huntingdonshire in 1812. Elizabeth had six siblings all born at Great Stukeley: John (1814), James (1819), James (1821), William (1823), Samuel (1827) and Joseph Pack (1829). At the time of the 1851 census Joseph and Elizabeth, described as a grocer, were living at Broughton with their sons James and John Wright (a younger John had died there at birth). Living with them was a Nawser Bedford and our Sarah Bodger's younger brother James. Joseph and Elizabeth had two more children at Broughton - Emily Annie and Matilda Jane - before moving to Everdon in Northamptonshire sometime before 1861. We think that Joseph and Elizabeth both died at Everdon, he in 1878 and she in 1882. All four of Joseph and Elizabeth's surviving children married and had children of their own as follows:

1.1 James Wright (1842-88) married Elizabeth Rugg Williams (1841-1911) in the St Thomas RD of Devon in 1868. According to Geoff Wright, James met Elizabeth when he went to make shoes for her father, a local solicitor. The married couple were living at Everdon in 1871 and Heavitree in Devon in 1881. Sometime after this they returned to Everdon where James died in 1888. The subsequent censuses show the widowed Elizabeth at Everdon with her four children in 1891 and at Kings Norton in Worcestershire, with her son Edwin and his family, in 1901 and 1911 (the year of her death). James and Elizabeth had four children: 1) Edwin Wright who married Adelaide Maybury in Birmingham in 1897 and had four children all born at Kings Norton: Bernard (1900), Ivy Christine (1903), Kenneth George (1910) and Ralph Stanley Wright (1915); 2) Emily Wright; 3) Adolphus Wright who married Kate Cock in Wolverhampton in 1899 and had at least one child; and 4) Bertha Wright.

1.2 John Wright (1847-95) married Elizabeth Hawtin Bird at Everdon in 1871. John, who also worked as a shoemaker, and Elizabeth lived at Everdon until John's death there in 1895 when she and their only son, William Hawtin Wright, moved to Northampton. William, aged 28, died at Northampton in 1906. We have yet to determine when and where Elizabeth died.

1.3 Emily Annie Wright (1852-79) married a Devon man John Rugg Williams (1845-81) in 1870 probably at Everdon although that has still to be confirmed. The 1871 census has John (a 26 year-old typographic writer) and Emily Annie living at St Giles in Cripplegate in London. With them was John's 14 year-old brother Edwin Williams. A year later their only son, Walter Rugg Williams was born at Everdon. I haven't been able to find Emily or John in the 1881 census (their son Walter was with his grandmother, Elizabeth Wright, at Everdon). They seem to have returned to Everdon at some stage for Emily died there in 1879 and John in 1881. We haven't been able as yet to determine what happened to their son Walter.

1.4 Matilda Jane Wright (1854-1902) married Thomas Judkins (1848-77) at Evendon in 1872. They had two children - Maud Mary (who died in 1889) and Thomas Judkins jnr (who died as an infant in 1878) before Thomas' death in 1877. In 1882 Matilda re-married, to a Norfolk-born policeman, Walter John Murrell, in the St Ives RD of Huntingdonshire. She and Walter were living in the Heigham parish of Norwich in 1891 with their three children, Walter John, Henry Edwin and Emily Mabel Murrell. The family was still at Heigham in 1901, the year Walter jnr died. His mother, Matilda Murrell formerly Judkins nee Wright, died the following year. Her second husband lived on until 1934.

We think Emily may have been married at Yarmouth in Norfolk in 1914 although that has still to be confirmed. According to the 'Wall Family Tree' on Ancestry, Henry Edwin married twice, first to Marie Pauline Germaine Pierrelot in around 1920 and, second, to Stella Enid Wall (1904-83) at Fulham on 14 September 1946 (it adds that at this time he was working as a publisher). Stella was born at Brockley in 1904, the daughter of George Thomas Wall (1864-1956) and Sophia Jane Williams (1872-1948) who were married at Birdingbury in Warwickshire in 1902. They think Henry died in Fulham two years after he married Stella.