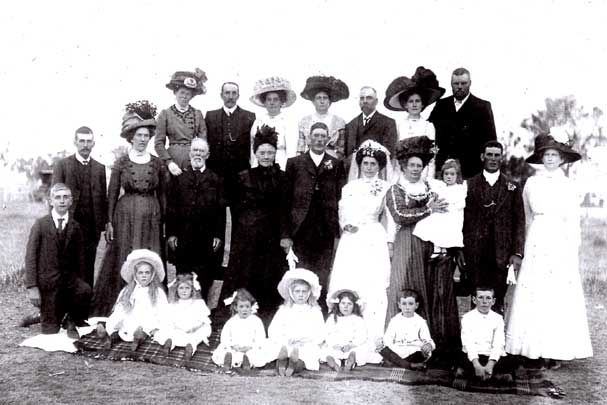 Sent to us by Robert White, this photo shows Edmond and Annie Florence Reilly nee Shepherd with
members of Edmond's family. 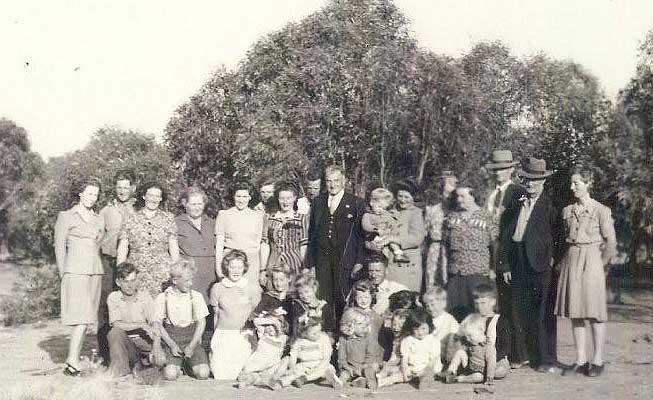 Sent to us by Norman Carter this photo was taken at Ouyen in Victoria in 1946.
It is of William Henry and Frances Hickmott and their family during a visit by some of William's
Western Australian relatives. Those we have identified to date are:
Standing from R/L: Gladys Blake nee Hickmott, William Henry Hickmott, Robert Bowron, Ella Adeline Bowron nee Hickmott,
Sophia Elizabeth Carter nee Hickmott, Grace Dean nee Hickmott (nursing unknown), Charles Carter.
Second from the left, John Hickmott. Fourth from the left, Frances Hickmott nee Free. On Frances' left, Lorna Hickmott. 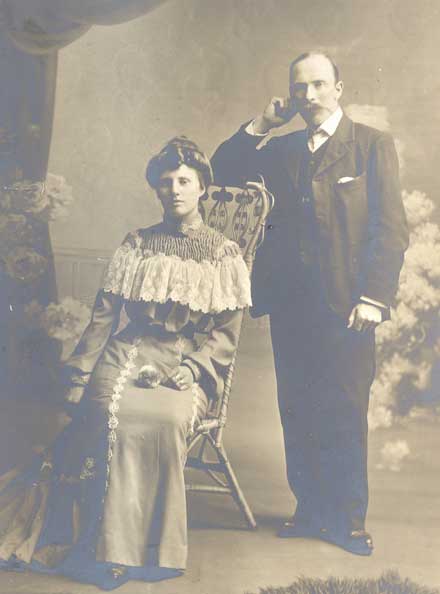 Provided by John Hasty, the great grandson of James Baden-Powell Hasty and Pearl Amelia Free,
this photo is, we think, of Pearl's older brother James Oswald Free and one of his daughters (Annie Florence
or Dorothy May Free). James was the son of James Oswald Free snr and Johanna Shepherd nee Mulchay. He married Emma Elizabeth Oliver at Lalbert in Victoria in 1913 and had six children.
Click here to read a brief account of their life and times.

Gillenbah School in the 1920s 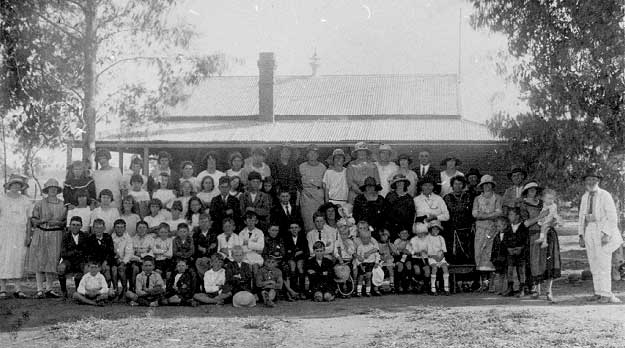 Provided by Mary-Anne Lattimore and Geoff Beecher, a grandson of Arthur and Florence May Beecher (nee Laurence),
this photo was taken outside the school at Gillenbah near Narrandera in New South Wales
sometime in the 1920s. We assume that there are members of the Beecher and possibly Laurence
families present but, as yet, don't know which ones they are.
Click here to read more about Arthur and May Beecher. More photos of them
and their family can be seen here 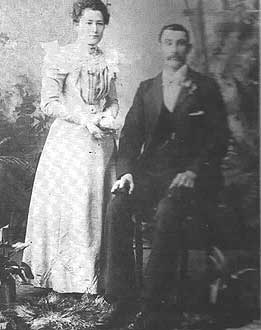 Provided by Margaret Donnan, this photo is of Mary Ann Free, the youngest daughter of William Free and Eliza Flavell, and her husband John William Donnan. It was taken at their wedding at Watchem in 1899.

Mary Ann was born at Raglan in Victoria in 1878, John at Yeo, near Colac in the Western District of Victoria, in 1868. He was the oldest son of Irish immigrants Hugh Donnan and Susan Ardill who came to Australia in around 1853 and 1863 respectively and married in Melbourne in 1867.

Click here to read more about their lives and family. 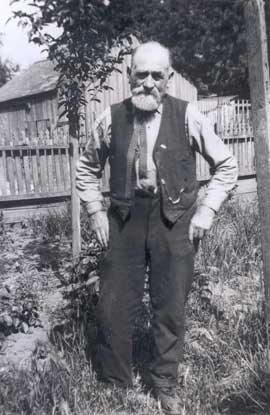 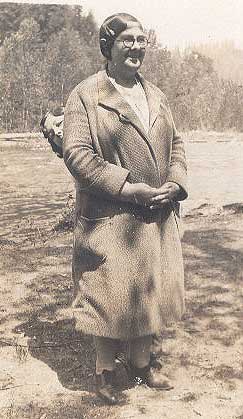 William Masten Cheeseman was our Benjamin's nephew. He was born at West Hythe in Kent in 1843, the eldest son of Benjamin's uncle Stephen Cheeseman (1816-1898) and his wife Grace Tearall (1820-1862). He emigrated to the United States some time between 1871 and 1880 where he married an Irish or Irish-American woman, Alvina Miller (1844-1891). The couple had four children: 1) Grace Terrel Cheeseman who was was born in 1880 in Puyallup in Washington and died in 1958 in Portland Oregon. She married first Albert Lyrton Miller and then Francis Anthony Tobin with whom she had three children: Genevieve Marie Tobin (Jane's grandmother), Grace Cheeseman Tobin (who died young of tuberculosis) and George Tobin (who married but did not have children). According to Jane Fox, 'George is the last living member of that family'; 2) Ethel Pauline Cheeseman (1893-1978); 3) Stephen Cheeseman; and 4) William ('Bill') Cheeseman who went live in Vancouver in Canada. After Alvina's death in 1891, William remarried. His second wife is shown in the photo directly above. To date her identity remains unknown. 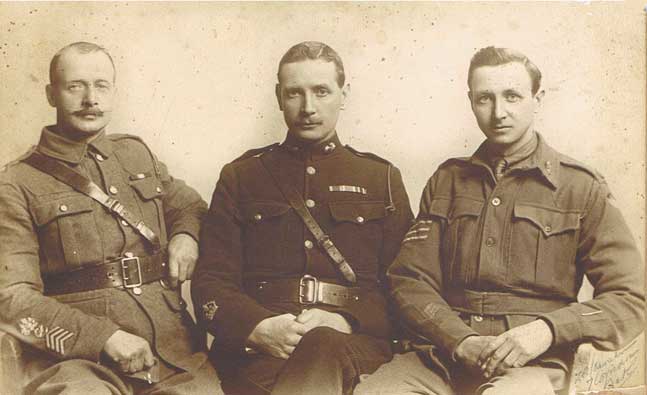 One of a number provided by Ian and Moina Bodger of Tamworth, this photo shows, on the right,
Ian's father Herbert Ainsworth Bodger and possibly two of Herbert's brothers Arthur and William Bodger.
It was taken during the First World War

Herbert was the youngest son of William and Elizabeth Bodger (nee Ainsworth). Born in Leytonstone
in Essex in England in 1888, he emigrated to Australia sometime between 1901 and 1915,
and served as a Sergeant in the 42nd Infantry Battalion of the First AIF during the Great War.
At war's end he lived initially in Queensland and then in Rabaul and New Guinea where he worked as
secretary to a gold mining company. While in New Guinea Herbert met and married
Edith Maud Bennett who had travelled to the island the previous year and was working as a governess.
Ill health forced him to return to Australia where he died in 1940 in Tamworth in New South Wales.
Click here to read more about Herbert and Edie's lives. The other photos of the family can be seen here

Al and Gracie Smith and family 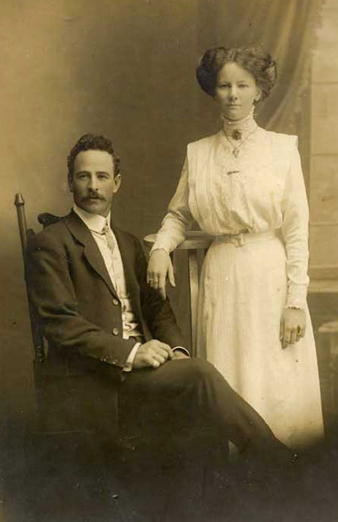 Also provided by Lisa Sukra, these two photos are of John Albert and Eliza Grace Smith (nee Brooks) and their family.

John Albert (or 'Al' as he was known) was born at Waubra in 1878, the sixth child of Joseph Colmer and Rebecca Smith (nee Hickmott). Not long after his birth he moved with his parents to Bungeeluke North near Lalbert. He attended the Lalbert state school after it opened in 1889 with his siblings and cousins from the Hickmott family.

Al married Eliza Grace ('Gracie') Brooks at Waubra in 1910, around the time that he took up a block of land at Wornack near Ouyen in the northern Mallee district. 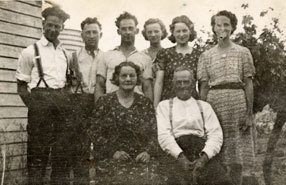 In 1912 Al and Gracie were joined by Al's cousin and good friend William Henry Hickmott and his wife Frances and their two girls Grace and Gladys. William had earlier helped Al clear his block of much of the Mallee scrub then covering it and was waiting to be granted his own allotment of land near Borongie, north-east of Ouyen.

Al and Gracie had at least six children including Lisa's grandmother Shiela Smith (later O'Connor). Al died at Footscray in Melbourne in 1944. 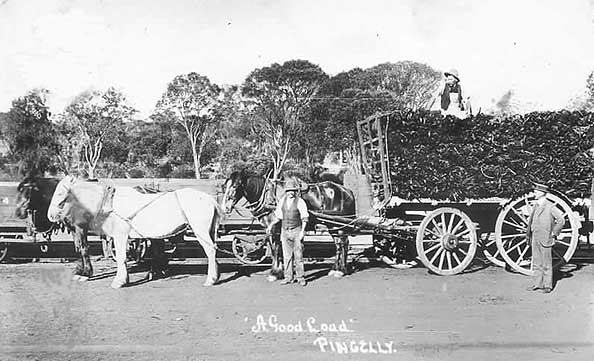 Also from the collection provided by my mother, Elsie Cheeseman (nee Hickmott),
the postcard with this photograph has written on it: 'To Sam and Fanny from
Maggie and Will wish you a happy Xmas 1909'.


Sam and Fanny are my mother's maternal grandparents Samuel and Frances ('Fanny') Free.
Will is Samuel's older brother William Free (1860-1951) who married Margaret ('Maggie') Barbour
at Emerald Hill in Melbourne in 1883. After their marriage the couple lived on William's
farm at Corack East at least until 1900. They had eight children while at Corack:
Mary Ann Flavell, Eliza Ada (who married John Hickmott at Lalbert in 1903), Emily Alice,
Sarah, Annie, Annie Wilson, William Walter Henry and Allan Walter.
We know that William Free died in Perth in June 1951 so it is possible the family
went to Pingelly from Victoria sometime between 1899, the date of birth of their last child,
and 1909. If this is the case, William may be one of the people in the photograh.

This is a copy of a photograph contained on Arthur Lipscombe's website,
'The Family Tree of the Adlers, Edwardses, Hogans, Lipscombes and Olivers'.
The original of photograph is held by Hilda Dean. It was taken in 1913
on the occasion of the marriage of Jack and Ruby Oliver (nee Bennett).

The persons in the photograph of direct relevance to us are James Oswald and
Emma Elizabeth Free (nee Oliver) who are fourth and fifth from the left in the rear row.
Born at Thalia in 1892, James was the eldest son of James Oswald and Johanna Free (nee
Shepherd). He married Emma at Lalbert in 1913 and farmed in the area all his life.
James died at Kerang in Victoria in 1967. Emma died at Lalbert in 1955.
The couple had six children: Robert James, John Henry, Annie Florence,
George Arthur, Dorothy May and Ronald Oswald.

According to Arthur Lipscombe, all those shown in the photograph are: