The Hickmotts in Western Australian

Three of Henry Hickmott's sons moved, with their wives and some or all of their respective children, from Victoria to Western Australia either during the gold rushes there or around the turn of the century in order to take up newly released farming land. This webpage details the life and times in the West of Henry's eldest son, Henry Edward Hickmott and his wife Elizabeth Owen who relocated there in around 1909. Details of Henry's other two sons who went to the west - James John Hickmott and Alfred Hickmott - can be viewed here.

A tennis party at Brookton in Western Australia around 1915

Life and times in Western Australia

In around 1909 Henry Edward Hickmott and his wife Elizabeth moved from Victoria to Western Australia where they had purchased a farm, which they named 'Dingley Dell', eight miles east of the inland town of Brookton. Their new property was 1357 acres in size and was watered by a well and 'several good soaks'. By the time it was first offered for sale in 1950, it had been fully fenced and had on it a four-room stone house and adjoining stables. Three of Henry and Elizabeth's grown-up children - William Henry, John Edward and Edith Olive Hickmott - elected not to go with their parents and remained in Victoria. Their remaining children all relocated to the west and established their own livelihoods and families there. As he had done at Lalbert, Henry soon became actively involved in the local community, serving as a founding member of the Brookton Farmers and Settlers Association and its President for two years, and a patron of the Brookton Swimming Club. On 21 October 1914, he was elected as the Country Party member for the electorate of Pingelly in the Western Australian Parliament where he sat for three terms before being defeated at the 1924 election. During the First World War Henry served on the Brookton Repatriation Committee which raised funds and other support for the soldiers and their dependents and helped returned men find employment. Throughout this time he retained his lifelong interest in cricket even participating, as the photo below shows, in a match between Parliamentarians and the press corps in 1921. Click here to read a detailed account of his ten years in the Western Australian Parliament. 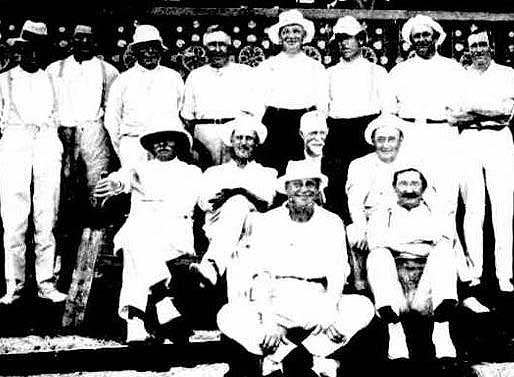 Photo of a WA Parliamentary cricket team in a match against a press team in 1921.
Henry Edward Hickmott is pictured three from the left in the centre row.

On 16 April 1923, Henry Edward's wife, Elizabeth, died while visiting their son William Henry and his family at Ouyen in Victoria's mallee district. Two years later Henry married Sarah Ellen ('Nellie') Clarke, the daughter of Alfred and Emma Clarke, in Perth. The newly weds lived at Dingley Dell after their marriage. It is not known whether they had any children. On Sunday 18 January 1931, Henry Edward was killed when he was thrown from a cart he was riding in while laying rabbit poison on his property. The cart hit a stone and he was thrown to the ground, breaking his neck in the fall. His funeral took place the following day and he was buried in the Methodist section of the Brookton Cemetery. The 26 January 1931 edition of the West Australian published the following death notice: HICKMOTT - On January 19, at Brookton, Henry Edward, loving father of Florence (Mrs Austin), grandfather of Gladys, Mavis, Elsie, Olive. Sadly missed'. Three days later: 'HICKMOTT - January 19, Henry Edward, beloved husband of Nellie, and devoted father of Sophy (Mrs Carter), Florrie (Mrs Austin), Alice (Mrs Weise), Ella (Mrs Bowron), Elsie (Mrs Whittington), Jack, Willie (Victoria), and George and Olive (Mrs Lewis deceased), Arthur (deceased). As a result of an accident'. And four days after that The West Australian published: 'HICKMOTT - On January 19, at Brookton, Henry Edward, dearly loved father of Minnie (Mrs Holdsworth), grandfather of Harry and Viv Lewis, Ted and Keith Holdsworth.' While Henry Edward's death was reported in most of the mainland newspapers, to date, I have found only two more detailed obituaries, the first in the West Australian and the second, longer obituary in the Pingelly-Brookton Leader:

Mr H.E.Hickmott, who was one of the pioneering members of the Country Party in the Legislative Assembly, died on his farm, a few miles from Brookton, on Sunday last, as a result of an accident. Mr Hickmott was born in South Australia 78 years ago, and was educated at a private school in that State. After some years residence in Victoria he transferred to Western Australia. He was returned in the Country Party interest for Pingelly at the general election of 1914, defeating Mr N. W. Harper, and held the seat for nine years. At the 1924 general election, owing to a temporary disagreement with the party he failed to receive its endorsement and was defeated by Mr J. H. Brown. Mr Hickmott continued to take an active interest in Country Party affairs, and was for some time chairman of the local branch of the Primary Producers' Association. He was married twice, and left a widow and nine children, all of whom are married (24 January 1931).

The death occurred of Henry Edward Hickmott on Sunday 18tb inst, as a result of an accident received, when be was thrown from a Poison Cart. On Friday 16th inst, the deceased was laying Rabbit Poison on his property, the cart struck a stone, causing him to be precipitated onto bis head and breaking bis neck. He was found several hours later by his wife, who sought the assistaoce of Mr Eva, who conveyed him to the Brookton HospitaJ, where be was examined by Dr. Walker, who held out no hope for his recovery. The death occurred at about 4.30 pm on Sunday, thus marking the passing of another old resident who had been closely associated with the progress of the district. Mr. Hickmott was born at Burra, near Adelaide, South Australia. He later resided at Charlton, Victoria for many years, where he was a Brickmaker and Builder. Farming was then undertaken in the Mallee District of Victoria where he stayed for about 18 years, after which he came West and bought a farm near Brooklon. In 1914 he entered Parliament as a Country Party member of the Legislative Assembly for this district, which he faithfully represented for 9 years; when he retired from political life on the death of his first wife. Since that time he remarried and has led a retired life on his farm. The funeral took place on Monday afternoon 19th inst, when the remains were interred in the Methodist portion of the Brookton Cemetery, the deceased being laid to rest by one of his sons. This sad event leaves a large family to mourn the loss of a loving husband and father, besides a large circle of friends, who gathered at the cemetery to pay their last respects to one who has done much for the district (29 January 1931).

One of Henry's great grandsons, Norman Carter, tells us that after Henry's death his second wife, 'Nellie', continued to live at 'Dingley Dell' on the interest paid from Ł5000 Henry left her in his will (Henry's eldest daughter Sophia was the executor of the will). Following Nellie's death in 1958, the estate was divided equally between Henry's children. Norman continues that the farm at Brookton continued to be occupied by Henry's descendants until at least the late 1960s (he thinks by Henry's youngest daughter Rebecca Elsie Whitington nee Hickmott and her husband Selby). He recalls the property as being 'rather stony' and within an easy drive from the local town by horse and cart. What of their children? Eight members of their family either accompanied Henry Edward and Elizabeth on their journey to the West or had already traveled there: Sophia Elizabeth, Florence Mary, Alice Ann, George Alfred, Ruby Minnie, Ella Adeline, Rebecca Elsie and James Arthur Hickmott. Their youngest son James Arthur Hickmott (1903-22), who was born at Lalbert, lived and worked at 'Dingley Dell' until his death there in a shooting accident in 1922. The circumstances surrounding his tragic death were described in the following report published in The Pingelly Leader on 15 June 1922:

A serious shooting accident occurred at the farm of Mr. H. E. Hickmott (member for the district) on Friday morning last. As far as can be gathered Mr Hickmott's son Arthur, a lad of 19 years, got up as usual about 6 o'clock, and proceeded, together with another lad, to carry out his usual early morning duties. The latter attended to the stable work, leaving Arthur Hickmott to light the kitchen fire, etc. However, the report of a gan was heard close at hand, and on investigation by Mrs. Hickmott, she was amazed to find her son Arthur lying close to the house, shot through the body. He was found to be seriously injured, and was hurried into Brookton by Mr. Pond, a neighbour. The lad, who was unconscious, passed away at about 1.30 the same afternoon. An inquiry was opened on Saturday and adjourned. The funeral took place on Sunday at 3 p.m., the cortege leaving the residence of Mr Holdsworth (son-in-law) for the place of interment, the Methodist portion of the Brookton cemetery.

The other seven children all grew to adulthood, married and had children and grandchildren of their own. Click here to read about Sophia, Florence and Alice and their times and families, and here for George, Ruby, Ella and Elsie Hickmott. 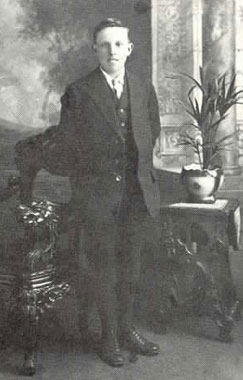 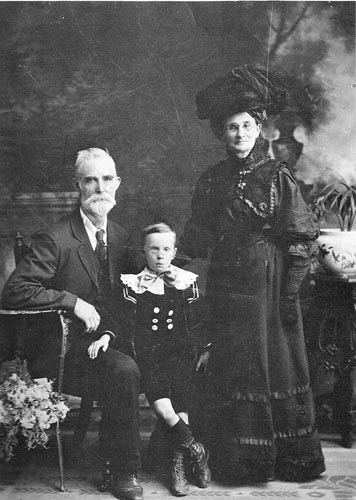 1. Henry Edward Hickmott c1914, from the Biographical Register of Members of the Parliament of Western Australia 2. Their youngest son James Arthur
(who died in a shooting accident at Brookton in 1922). 3) Henry Edward, Elizabeth and Arthur in around 1910. 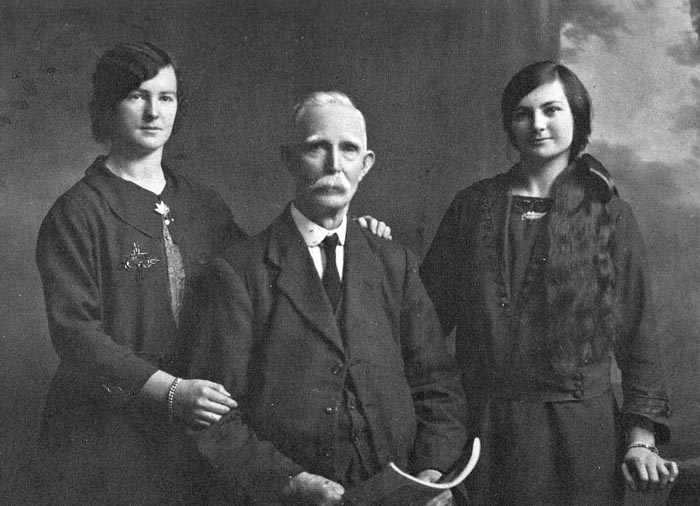